Joseph B. McGlynn, Jr., is the Founder of the St. Patrick’s Day Parade in St. Louis, and continues as the group’s CEO and primary advisor. He has also served as the Honorary Consul General for the Republic of Ireland since 1978.

A visionary, Joe’s list of accomplishments and accolades fills many pages. His volunteer work and civic involvement include service to St. Patrick Center, Fontbonne University, the Notre Dame Alumnae Association, the Ancient Order of Hibernians, the Knights of the Equestrian Order of the Holy Sepulcher, and numerous other groups.

A 1955 graduate of the University of Notre Dame, Joe went on to earn his law degree from Saint Louis University, and has spent more than fifty years defending corporations and individuals in all manner of civil lawsuits. Joe’s client list has included both domestic and international companies in the state and federal courts of Missouri and Illinois. He continues to enjoy the practice of law in a firm that traces its roots to Joe’s grandfather, who first opened the doors in 1896. Joe has been named as one of the country’s Top 100 Irish Lawyers on multiple occasions.

Joe and Helen McGlynn have been married for over 60 years. They have five children and seven grandchildren.

Mo McGlynn is currently the Managing Partner of Kortenhof McGlynn & Burns LLC, a boutique litigation firm that traces its roots back to 1896, when Mo’s Great-Grandfather began practicing law. The daughter of Parade Founder Joseph B. McGlynn, Jr., Mo has worked on the St. Patrick’s Day Parade Committee since she was a teen. She first acted as Committee Chairperson in 1999 and 2000, and again in 2020 to set the tone for the next half-century.

Mo has three amazing kids that are the joy of her life – Connor (25), Aidan (22) and Maeve (14). Mo has been on the Board of St. Patrick Center, serving as Board President in 2010, and has remained active in numerous other civic and volunteer roles.

Currently Mo is active in her church, serves with a Homeless Outreach Team in downtown St. Louis, and stays involved coaching underprivileged girls through the Girls on the Run program. She is looking forward to her continued involvement with the nation’s best St. Patrick’s Day Parade for years to come.

Jim Curran is currently Senior Vice President of Business Development for Hays Companies, an Employee Benefits and Risk Management firm. He also serves on the Board of Directors of Meramec Valley Bank. In 2019, Jim was recognized by Small Business Monthly as one of the Top 100 St. Louisans to Know to Succeed in Business.

Jim has worked on the St. Patrick’s Day Parade Committee for 13 years. He served as Chairman of Judging/Awards for the past 10 years.

Jim is a descendant of Denis and Sarah McKinley Curran who came to America in 1850, settling first in Chicago and then moved to St. Louis in 1860. Jim has a gorgeous wife named Lisa, three great kids McKinley, Ellie and Finnian and a boxer named Marta. 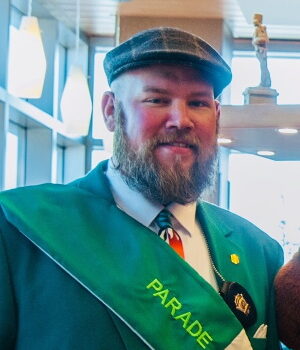 Kevin was born and raised in St. Louis MO attending St. John the Baptist grade school and High School. In 2003 he graduated from Ranken Technical Collage Majoring in Industrial Electricity and Electronics.

After College, Kevin went to work for various companies and eventually landed at Terminal Railroad Association of St. Louis as a railroad signalman. He is currently a Railroad Signal Testman in charge of testing vital safety related railroad signal equipment.

Kevin has been involved with the St. Patrick’s Day Parade for over 22 years, starting as a Parade Marshall and working his way up through numerous positions.

Kevin has been married to his wife Jennifer for 14 years and together they have 2 amazing sons, Colton 11 & Tucker 6.

Kevin’s goal as Parade Director is to assist the Committee in making the parade a successful, community wide event while encouraging and facilitating a high level of youth participation and involvement.